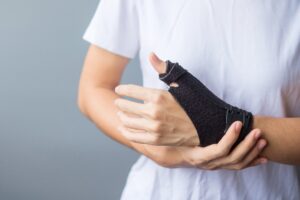 If you suffer from chronic pain or weakness related to Tenosynovitis, don’t hesitate to Schedule an appointment with one of our orthopedic specialists.

Although physicians do not know the exact cause of De Quervain’s Tenosynovitis, any activity that applies repetitive movement to the hand or wrist — such as yard work, golf, racket sports, or lifting children — can make it worse.

Symptoms of De Quervain’s Tenosynovitis can include:

If patients allow the condition to advance without treatment, the pain may spread further into the forearm. Pinching and grasping movements aggravate the pain.

Physicians determine Chronic overuse of the wrist as the most common cause of De Quervain’s tenosynovitis.

When you grip, grasp, clench, pinch or wring anything in your hand, the tendons in your wrist and lower thumb normally glide smoothly through the small tunnel that connects to the base of the thumb. Repetitively making the same motion on a daily basis can irritate the sheath around the wrist tendons, which causes them to thicken and swell, which restricts their movement.

Other possible causes of De Quervain’s Tenosynovitis can include:

If you line up with any of the following, you could have a higher risk of presenting with De Quervain’s Tenosynovitis:

During a De Quervain’s Release surgery, the hand surgeon makes a small incision near the base of the thumb on the wrist. The surgeon then locates the inflamed tendon and makes a small slit in the sheath surrounding the tendon, releasing it. This allows the tendon sheath to open wider and relieves pain by releasing pressure and friction within the tendon.

After the surgery, the hand surgeon will close the incision with sutures, bandages, and then apply a splint. As an outpatient procedure, Patients will go home from the hospital the same day as the operation.

If you would like to speak to a precision orthopedic hand and wrist specialist, give us a call at 817-697-4038, or contact us over the web. Tele-medicine appointments are also available.