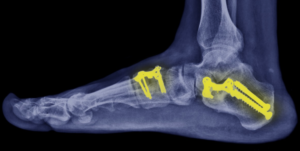 If you suffer from pain related to a broken or arthritic foot, don’t hesitate to Schedule an appointment with one of our orthopedic specialists.

What is a Foot Fusion?

In a Foot Fusion surgery, an orthopedic foot and ankle specialist aims to permanently fuse two bones together so that the joint between them can no longer bend. Physicians use fusion to treat conditions such as flat feet, arthritis (both rheumatoid and osteoarthritis), and fractures that refuse to heal on their own.

Orthopedic Foot Specialists use Foot Fusion surgery to permanently fuse separate bones in the foot together. Foot Fusions can treat flat feet, osteoarthritis, rheumatoid arthritis, and fractures that refuse to heal on their own, or cartilage and bones that have worn down over time.

Hindfoot fusion involves the permanent fixation of the Chopart joint, made up of the talonavicular and calcaneocuboid joints, to relieve hindfoot arthritis. These two joints form an ‘S’- shaped connection that transverses the foot, separating the hindfoot from the midfoot. Fusing this joint usually doesn’t impact movement.

Surgeons perform Subtalar Fusion either to correct painful deformities or instability in the subtalar joint, or to remove the pain of arthritis. During surgery, surgeons remove the joint between the talus bone and calcaneus bone and fix the joint surfaces together. The goals of subtalar fusion include decreasing symptoms and allowing improved function with less pain.

How Long Does it Take to Recover From a Foot Fusion?

After receiving a foot fusion, the doctor will have patients wear a plaster cast around the foot for two to six weeks before replacing it with a lighter cast for around 6 more weeks. Before leaving the hospital, patients will learn how to properly use crutches and also learn exercises that will help them recover strength and flexibility in the foot.

After surgery, patients should stay off of their foot and keep it elevated for two weeks. Patients should also make sure to perform their prescribed stability exercises and stretches given to them by their physical therapist. Starting in week two, patients should practice walking short distances with the aid of crutches, while still avoiding weight on the recovering foot.

At the six week mark, patients will return to the office for a followup appointment and X-rays. If the physician confirms the foot has continued to heal properly, patients may start putting weight on the foot with the assistance of a provided surgical sandal.

At the twelve week mark, the bones in the foot will have completely fused together and patients can move around without the cast and safely drive again. Patients can usually start driving earlier than twelve weeks if they received a fusion on their left foot, though they may need to check with their insurance provider.

If you would like to speak to one of our DFW orthopedic foot and ankle specialists, give us a call at 817-697-4038, or contact us over the web. Tele-medicine appointments are also available.